Last time we finished with the Lord’s prayer. It takes the choices that Jesus asks us to make and puts them in prayer form. It is an acknowledgement of the difficulty of the task. As I said, making the choices isn’t hard. It is the consequences of those choices that can quickly become an uphill battle. Jesus likened that journey to picking up your cross and following Him. Why?

Because the consequences of our choices will put us at odds with the ways of the world and with a supernatural foe. Jesus called this enemy: the prince of this world. It is indeed a battle. But Jesus already pointed out in the Beatitudes that avoiding that battle, by choosing the world’s side, is not a picnic either. Choosing to stay in the world can only lead to eventual destruction because that is all this world can offer. This universe is constrained in every way by the second law of thermodynamics. Everything decays, Nature, my body, the moral fabric of every culture. But in the Kingdom of God there is supernatural power that supersedes every law and every power of this world.

Let’s keep going through the Sermon on the Mount and see how Jesus continues to develop this idea that our life is founded on a series of choices that we all can make. These choices always end up being in the form of an “either-or”; we either choose for the Kingdom or we choose for the world.

Before the Lord’s prayer, Jesus started developing the concept that our acts of righteousness are not meant to be used to gain favor in the world. At first blush this might seem a contradiction. Haven’t we stated that the world is at odds with the Kingdom? Why would the world reward us for performing righteous acts, that is, deeds that the Kingdom requires of us? It might seem that those warnings were appropriate for the society in which Jesus lived, where religion and people in religious power held great sway over the community. And therefore, acting religious would earn you favor. But that doesn’t seem to be the case in the world we live in today. Yet it still applies today.

Again, to the willing interested reader, I highly recommend SK’s trenchant analysis of the psychology of people and their societies; it makes this point perfectly clear. I cannot do justice to his beautiful analysis in any kind of summary form. Instead, let me point out that the world system seldom takes the form of anarchy. There is power in people working together and therefore the world system must have some sort of order, some sort of power structure, some sort of definition of right and wrong, and an associated system of deterrents and rewards. That is the only way to motivate a society to stick together. Therefore, the world has its own definitions of virtue and vice. In form, even in function, they may be similar to the definitions that the Kingdom of God has but they are usually distorted versions.

Thus, it is no surprise that giving to the poor is considered, at least publicly, a virtue in the world. And you will be admired and held in high esteem if you give thousands of dollars from your millions to help this or that other worthwhile cause. You’ll do even better if you successfully lobby the government to get all those other millionaires, that are not as good as you, to do their part – because, hey, we all know they have too much already, and that’s not fair…

But can you imagine what the world would think of a millionaire that gave it all away – to his own hurt? Not all his excess away, but all his substance, until he had nothing left, until he had become as poor as one of those indigents that his former charity had helped. What would they say of such a person? Won’t some say he’s gone too far? Maybe he has had a psychological breakdown. What would you say? Would you praise him as having done the greatest deed anyone could do? Really? I guess you will do exactly the same thing next week. Right? After all, to give it all away until you have nothing left does not require you to be rich at all…

Jesus talked about giving alms and praying to God as being two righteous things we ought to do in secret because our rewarder who is unseen can see all that is done in secret. Now in Matthew 6:16-18 he adds one more thing to that list: Fasting.

Matt 6:16-18 “When you fast, do not look somber as the hypocrites do, for they disfigure their faces to show others they are fasting. Truly I tell you, they have received their reward in full. But when you fast, put oil on your head and wash your face, so that it will not be obvious to others that you are fasting, but only to your Father, who is unseen; and your Father, who sees what is done in secret, will reward you. 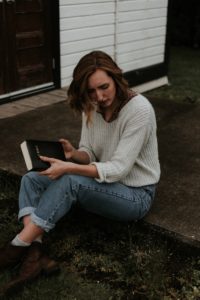 The principle is the same as the first two, but why does this one appear after prayer? I think it’s because prayer and fasting go together. But more than that because fasting is a kind of prayer where we are specifically calling on the power of Heaven to do something we know is completely beyond our power. I base this interpretation on that episode in the gospel when Jesus is coming down from the mount of Transfiguration with Peter, James, and John, to be faced with a crowd that is arguing with the other disciples.

A man in that crowd had brought his demon-possessed son to Jesus, and not finding him, asked his disciples there to cast the demon out. But they couldn’t. After Jesus does it, and the disciples are all with Him in private, they ask Him why they couldn’t do it. Jesus’ answer comes in two parts: (a) your faith is puny (b) this kind only comes out with prayer and fasting.

Isaiah 58:1-9 “Shout it aloud, do not hold back. Raise your voice like a trumpet. Declare to my people their rebellion and to the descendants of Jacob their sins. For day after day they seek me out; they seem eager to know my ways, as if they were a nation that does what is right and has not forsaken the commands of its God. They ask me for just decisions and seem eager for God to come near them. ‘Why have we fasted,’ they say, ‘and you have not seen it? Why have we humbled ourselves, and you have not noticed?’

“Yet on the day of your fasting, you do as you please and exploit all your workers. Your fasting ends in quarreling and strife, and in striking each other with wicked fists. You cannot fast as you do today and expect your voice to be heard on high. Is this the kind of fast I have chosen, only a day for people to humble themselves? Is it only for bowing one’s head like a reed and for lying in sackcloth and ashes? Is that what you call a fast, a day acceptable to the Lord?

“Is not this the kind of fasting I have chosen: to loose the chains of injustice and untie the cords of the yoke, to set the oppressed free and break every yoke? Is it not to share your food with the hungry and to provide the poor wanderer with shelter— when you see the naked, to clothe them, and not to turn away from your own flesh and blood? Then your light will break forth like the dawn, and your healing will quickly appear; then your righteousness will go before you, and the glory of the Lord will be your rear guard. Then you will call, and the Lord will answer; you will cry for help, and he will say: Here am I…”

When we fast, we are acknowledging that we have hit a point where we need power greater than our own and that that power, real power, is not in this world but in the Kingdom. Therefore, Jesus is now going to deal directly with this concept of power.

Get New Stories in Your Email

Sign up to receive new stories in your email as they're published.

It’s all about communication. The thrill of research, discovery, and invention that drives me on, was cultivated in me by every person that taught me something in my life. And therefore it is meaningful, only, if I pass it on. This is why I teach. This is why I write.
END_OF_DOCUMENT_TOKEN_TO_BE_REPLACED