A tale of three lions… and other monkeys

In his book, The Abolition of Man, C. S. Lewis argues, from the historical evidence, that there is a moral code held in common by all humanity. He calls it the Tao of humanity (also known as the Natural Law or Traditional Morality) and it has existed since antiquity. If there is such a moral code, intrinsic to the human psyche, then any claims that we can invent our own moral code are moot. Even if I argued that I did invent my code, isn’t it just as likely that I picked and chose from the maxims already existing within me? Then, the real interesting question is where did the Tao come from?

The Tao is built on the doctrine of objective value. As Lewis says: “the belief that certain attitudes are really true, and others really false, to the kind of thing the universe is and the kind of things we are.” It also has the property that it is a whole, containing within it maxims that provide checks and balances on each other. For instance, it contains the duty to our own kin, side by side with the demands of Justice and the rule that, in the end, all men are our brothers.

Nothing beats reading Lewis’ original, but here is my summary:

Rules of Duty: The “ought”

Rules of Truth and Justice

Where did it come from?

If, as Lewis says, “the human mind has no more power of inventing a new value than of imagining a new primary colour, or, indeed, of creating a new sun and a new sky for it to move in,” then this set of intrinsic values constitute an axiom of what it is to be human. It is part of the ultimate foundation of our psyche, at least at the present time; which is why Lewis says that it is hopeless to try to step outside of it to judge it or argue against it.

I would suggest it is an axiom in the same sense that the law of conservation of energy is an axiom of our universe. By this I mean it is an Unassailable Law.

(I will talk about these more in a future blog.)

The question remains, how did the Tao become part of us? If I do not want to believe that a transcendent God included it into our being, on purpose, then the only mechanism supposedly available is evolution.

Darwin wanted to believe this: “the social instincts lead an animal to take pleasure in the society of his fellows, to feel a certain amount of sympathy with them, and to perform various services for them.” (The Descent of Man; Charles Darwin (1874); Chapter IV).

Dacher Keltner, director of the Berkeley Social Interaction Laboratory, in his book Born to be good specifically states that “our mammalian and hominid evolution crafted a species – us – with remarkable tendencies toward kindness, play, generosity, reverence and self-sacrifice, which are vital to the classic tasks of evolution—survival, gene replication and smooth functioning groups.”

Are Keltner and Darwin really seeing evidence of the evolution of ethics or are they projecting onto animal behavior an interpretation based on our own human ethics?

The evidence from animal behavior seems to contradict the hopeful view of our mammalian evolution.

A tale of three lions

I remember many years ago seeing a nature show about lions. Usually the lion that leads the pride is an old powerful male whose size, strength, and experience qualify him as the best leader and protector. Therefore, the rule is that as the young male lions approach adulthood, they are driven away from the pride so that they can go away and start their own prides. No young lion is a match for the head of the pride. And any challengers are quickly reminded of that and forcibly driven away.

But in this recorded instance, two of those young males came back. And while one of them could not possibly overpower the king of the pride, the two of them working together, attacking from different sides, eventually wore out the king and drove him out.

The story doesn’t end there. The lionesses in the pride were not ready to receive the advances of these young lions, for the natural reason that they were still nursing recently born cubs, children of the old king. So, the young lions went and found all the cubs, and killed them. The lionesses finding themselves without a brood, readily accepted the new lions as their rightful mates.

That’s the way Nature works… not the ethics we would like to get from evolution… unless you are Hamlet’s uncle.

Have you ever heard of the Gombe War?

The outbreak of the Gombe Chimpanzee war fully revealed to Jane Goodall the “dark side” of chimpanzee behavior. She had already witnessed cannibalistic infanticide by a high-ranking female in the community, but the war between Chimpanzee tribes really disturbed her. 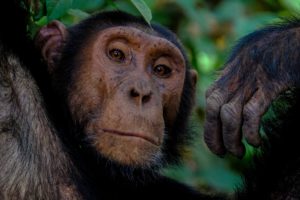 “For several years I struggled to come to terms with this new knowledge. Often when I woke in the night, horrific pictures sprang unbidden to my mind—Satan (one of the chimpanzees), cupping his hand below Sniff’s chin to drink the blood that welled from a great wound on his face; old Rodolf, usually so benign, standing upright to hurl a four-pound rock at Godi’s prostrate body; Jomeo tearing a strip of skin from Dé’s thigh; Figan, charging and hitting, again and again, the stricken, quivering body of Goliath, one of his childhood heroes.” (Jane Goodall, Through a Window: My Thirty Years with the Chimpanzees of Gombe, Mariner Books, Houghton Mifflin Harcourt, New York, 1990.)

That’s where evolution has taken the Chimpanzee. Can we expect any different from humans?

If you are a meerkat and see another meerkat coming… run! 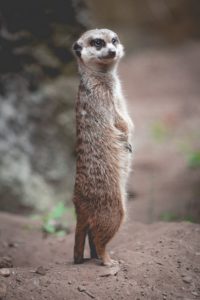 In “The phylogenetic roots of human lethal violence,” José María Gómez et al (Nature, volume 538, pages 233–237; 13 October 2016) report that “phylogenetic analysis suggests that a certain level of lethal violence in humans arises from the occupation of a position within a particularly violent mammalian clade, in which violence seems to have been ancestrally present. This means that humans have phylogenetically inherited their propensity for violence.”

Ed Yong at The Atlantic organized their data into this lovely chart (derived from the original article’s section IX. Supplementary Data). 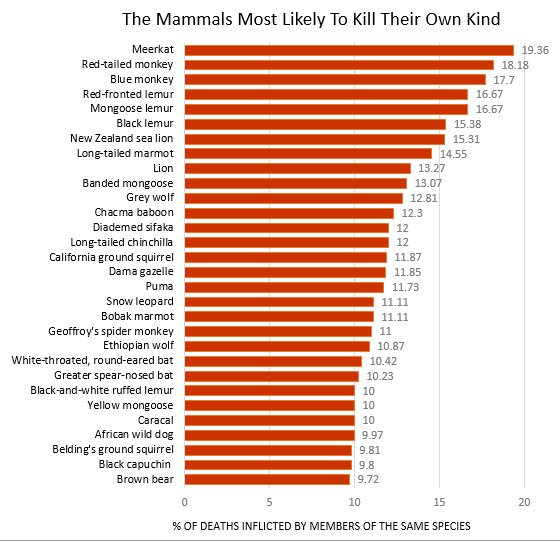 The graphic tallies what percentage of the deaths examined for a given species were caused by an animal of the same species. If you are a meerkat, you have a one-in-five chance of being murdered by a fellow meerkat.

According to the study, Homo sapiens is six times more lethally violent than the average mammal, but about as violent as expected for a primate. The authors then analyzed evidence for lethal violence in prehistoric humans and concluded it fell within the expected range. But since those prehistoric times, the rate of violence has decreased thanks to “changes in the socio-political organization of human populations.”

It appears that, if anything, what evolution has selected us for is violence.

And because the time period encompassed by human civilization in terms of geologic time is so small (thousands of years against millions) no argument can be made about Natural selection being the force that turned the tide of our violence.

But that’s what the Tao does

The lion cannot overrule its instincts, nor can the chimpanzee. But humans can.

And even if we wanted to argue that all those instincts could be evolutionarily explained, the power to overrule them cannot be so explained because it is not an instinct. It is deeper than that.

Where did the Tao come from? If not from evolution, it is either an axiom of humanity – unexplained and unexplainable – or…

Ecclesiastes 3:10-13 (NIV) I have seen the burden God has laid on the human race. He has made everything beautiful in its time. He has also set eternity in the human heart; yet no one can fathom what God has done from beginning to end. I know that there is nothing better for people than to be happy and to do good while they live. That each of them may eat and drink, and find satisfaction in all their toil—this is the gift of God.