Saw the sad news this week: Stan Lee passed away. My brother and I grew up reading and collecting Marvel Comics in the early 1960s. We loved the artwork, we copied the artwork; and, I can definitely say, the stories had an impact on me. It was not just adventure and entertainment, and it was not just about good vs. evil. There was always this message, this touch of reality, that making that choice (good vs. evil) had consequences; and that to stand for good, for love, for fairness, for what is right – more often than not – requires sacrifice. Stan Lee and Jack Kirby: I must have been 7 or 8 when I learned those names, and I’ll never forget them.

I actually met Stan Lee once.

Back when we were at Yale, a group of my friends decided that we should ask Stan Lee to teach a seminar at Morse College on comic books as a form of literature for our times. (It must have been 1977.) I don’t remember who it was that organized the whole thing, and I also can’t remember how many of us there were. But we went to New York, to Marvel Comics, and Stan Lee received us and talked to us.

Two things I remember: First, he told us we were not the first; he had been asked to do the same kind of thing several times over the years. He was open to it. He of course loved the comic book medium. And he also pointed out what was wrong with some of the books we had cited as “texts” to be used for the seminar. But then it never happened. Who dropped the ball? It was either us or maybe the administration at Morse College didn’t approve it. Still… I never forgot it.

Second thing: On the way to the meeting (if my memory has not been distorted by the years) I remember walking through a large open office space, and seeing this full size original cover for one of their comics (I think it was a “Tomb of Dracula” cover). I just remember that “wow” reaction as I saw the original up close, black ink and water color rendering, with all the details. It was beautiful.

Many years later I met Jack Kirby. But that’s another story.

Continuing from last time: In his answer to the “manufactured articles” question from the Bishop of Gloucester and Bristol, James Clerk Maxwell said that the uniformity of atoms and molecules suggests “a uniformity intended and accomplished by the same wisdom and power of which uniformity, accuracy, symmetry, consistency, and continuity of plan are as important attributes as the contrivance of the special utility of each individual thing” 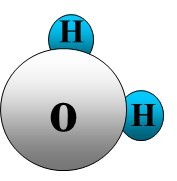 I would like to discuss briefly a molecule that fascinates me, and which I discussed in my dissertation, namely, water. [Diaz and Alexopoulos; “An analytic continuation method for the analysis and design of dispersive materials”; IEEE Trans. Antennas and Propagation; Vol. 45, No. 11; Nov 1997; pp 1602-1610.]

Chemists and experts in molecular dynamics can accurately predict the vibro-rotational states of the water molecule. Each of those states is like a tuned guitar string in that they respond strongly to particular frequencies. For instance, if you used the microwave oven this morning to warm up some food, you just exploited one of those states, because the water in food absorbs microwave radiation efficiently. (This is known as the 20 GHz relaxation.) 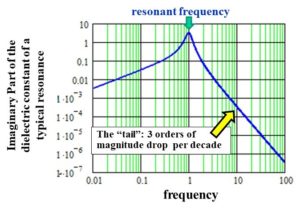 However, there is a problem with the picture that results from this analysis.  Each of those states, in addition to responding strongly to particular frequencies must also respond, even if only weakly, to all other frequencies.

When you carefully fit the spectrum of water with the line shape of those resonances and do the mathematics, you find out that water should not be transparent to visible light!

In this graph from my dissertation the dashed curve shows that the linewidth of the resonance near 3 microns implies a tail that is much higher than the actual data at the higher frequencies (solid line data). That sudden drop in the data is what we call the optical valley.

Yet water is utterly transparent…

Now, this is fascinating, because our atmosphere is full of water vapor. If water were not completely transparent to light, the light from the Sun could not get down here to feed the plants, the plants in turn could not feed our cows, and the cows in turn could not give us hamburgers. McDonald’s would not exist, and Life on Earth, as we know it, would end.

What saves us? The astounding coincidence that the water molecule refuses to vibrate and absorb energy over the visible spectrum. Over the range of frequencies that precisely bracket the range of maximum power output from our Sun, all those vibrational states appear to be shielded or hidden, and thus prevented from interacting with the light.  Yet in the destructive UV range, water becomes absorbing again. Am I saying this is a supernatural phenomenon? No, I can write down the mathematical formula (a circuit model) that explains it, and I can show that those formulas are in accord with the fundamental laws of Nature. (And with this knowledge you can even build an artificial material that exhibits an analogous phenomenon at microwave frequencies.)

Undoubtedly someday someone will actually formulate the Quantum Mechanics model that explains it in water. What we can say (with Maxwell) that is truly suggestive of the supernatural, is the incredible coincidence that this phenomenon should occur at the right range of frequencies corresponding to the color of our Sun and in the one substance that is the absolute prerequisite for the existence of life.

Water looks like a manufactured article; it appears to have been made on purpose for a purpose.