What do you know for certain?

Ages ago, when I was working on my Bachelor’s degree in Physics, there was this friend at the university that every so often would ask me “Rudy, what do you know for certain?” If you know a Physics major, you know most of them love to engage in philosophical debates. Therefore, many discussions were spawned from that question. Back then I never thought that that question would become a central theme in my life.

Physicist’s love to think. The gedankenexperiment – the thought experiment – is quintessential Physics. It means that we are able, by reason alone, to use existing data, existing equations, to analyze a new problem and obtain its solution without having to perform the experiment. We can ask “what if” of many scenarios we have never seen and reach a correct conclusion.

Note how I qualified that last sentence with the word many. The gedankenexperiment works only if all the relevant parameters of the experiment are known, well defined, and covered by the laws and equations we are about to use. Therefore, a key question to ask before embarking into solving a thought experiment is, “what do you know for certain?”

But thinking is not the exclusive province of Physicists and scientists; it is a capacity, a gift, all of us humans have. And I would argue that all of us engage in thought experiments knowingly or unknowingly. Psychologists point out that humans, and sentient animals, are constantly surveying their environment and evaluating it against two primary concerns: (a) the familiar, and the good we expect from it, and (b) the unknown, and the danger it might pose [see Maps of meaning, by Dr. Jordan Peterson, Routledge, New York, 1999.]

I would claim that the value we assign to events that happen in our lives (are they good, are they bad?) depends on the answer to that question: “What do you know for certain?” Otherwise we are making decisions based on incomplete information. It follows that the more things I know for certain, the better equipped I am to evaluate my life and make decisions that make sense to me. (And, I hope you agree that my decisions must make sense to me. Telling someone else, or even myself, that I did something because so-and-so told me it was the right thing to do is a cop-out that no human being can afford.)

Maxwell’s take on this

This is how J. C. Maxwell explained it in a letter to a friend: “The Rule of the Plan is to let nothing be willfully left unexamined. Nothing is to be holy ground consecrated to Stationary Faith, whether positive or negative. All fallow land is to be ploughed up, and a regular system of rotation followed. All creatures as agents or patients are to be pressed into the service, which is never to be willingly suspended till nothing more remains to be done…”

The imagery is compelling. Just as land must be plowed and turned over periodically so it recovers its fertility, so our thoughts, our preconceptions, our assumptions need to be re-examined over and over to ensure that they are true and worthy of guiding our lives. (And we should also note the fact that the land is left unsown for a time – that is, giving rest to the land plays an important role in that renovation. But that is another sermon.)

Maxwell was a believer. To him this constant re-examination, this constant questioning of ‘why do I believe what I believe?’ was not just a prescription for his scientific work, it was a prescription for his life of faith. For there to be meaning in my claim that I believe something or in something, that belief has to have been challenged and survived. And I have the foremost responsibility to be the one to challenge it.

Therefore, Faith must be challenged

I would like to present to you a couple of passages from the gospels and ask you to interpret them for me.  The catch is I’m not going to tell you where they come from.  I want us to work from memory.

Now, we should go to the Scriptures to check out whether our recollections are correct.  So let’s do that.  (All Scripture citations are form the NIV.) Let’s go to Mark chapter 4.

Mk 4:1 Again Jesus began to teach by the Lake… Mk 4:2 … He taught them many things by parables…Mk 4:3 … “Listen! A farmer went out to sow his seed.  As he was scattering the seed, some fell along the path…”

Does this sound familiar?  I won’t read the rest of the parable. If it sounds familiar, you probably know it. If you’ve never read it, by all means read it. It is all about the kinds of people that we can be when it comes to listening to the Word of God. It talks about why some of us receive it and some do not. The reason I take you to this passage is not for the parable itself, but to – first – remind all of us that Jesus taught in parables. He taught this truth, regarding our receiving of the Word of God, in terms of the story of a farmer, the seed, and the soil. Obviously, he wasn’t teaching about farming. His audience knew full well all about that. What he was doing was presenting to them a very important lesson hidden inside that parable. That’s why when He was done, He said:

Now, do you think His audience understood the hidden message? Well, I don’t know. But I do know that His disciples didn’t.

Mk 4:10 When He was alone, they asked Him about the parables.

In other words, they asked Jesus, Why are you teaching us things in parables? Jesus answered:

Mk 4:11-12 “The secret of the kingdom of God has been given to you. But to those outside, everything is said in parables so that they may be ever seeing but never perceiving, and ever hearing but never understanding; otherwise they might turn and be forgiven.”

And you have to pause at this and say, did I hear right? Why is the secret of the kingdom being revealed to the disciples and not to the rest of the people? Are they better than the rest? Then why? What did they do that nobody else did? 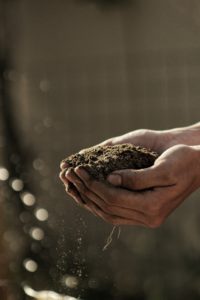 Jesus is saying, this is the foundational parable of the kingdom of God. Why is it foundational? Because in Hebrew thinking (if you look at Genesis you see this) even though plants bear their own seeds, it is the soil that brings forth the plant. In the parable we are the soils. In the parable the critical issue is, how do you receive the Word of God? Do you receive it actively and soak up the seed and feed it its minerals and make it come bursting forth with life, or do you do nothing about it? Listen to what Jesus says after He is done with the explanation:

Jesus is not changing the subject to talk about evangelism here. He is staying with the theme of parables. He is saying, When I utter a secret of the kingdom, do I say it so it remains hidden? Or Do I say it so that it brings out light?

Mk 4:24 “Consider therefore carefully what YOU HEAR.  With the measure that you use it will be measured to you, and even more.  Whoever has will be given more, whoever does not have, even what he has will be taken from him.”

In other words, this whole speech is about listening AND asking questions. Jesus didn’t come to Earth waste saliva.  Every Word is a lamp unto our feet, but WE must put it on a stand. It may come hidden but it is MEANT to be disclosed. We must ask, we must search it out. Consider carefully how you hear. Hearing is like being good soil, it is an active thing, and it is rewarded. The more you want to know, the more knowledge will be given unto you… But if you don’t want to know, if you don’t care… even the little you have will eventually vanish in your apathy.

This is a beautiful truth that we are commanded to take to heart.  You must seek if you want to find. In fact it is guaranteed that if you seek you will find. But the point is that we MUST seek, you must ask.  There is an effort involved. Because the effort that we are willing to expend in the search of the truth is a measure of our willingness to live by that truth. You are not going to work for something you don’t value. And this is why Jesus spoke in parables. This is why He chose not to make His every truth plain and obvious.  Because: Our work reveals our heart.