Last week’s memories of Stan Lee reminded me again of my favorite comic book artist: Jack Kirby. I got to meet him once. It must have been 1986 or 1987. Jack Kirby was autographing comics at a Comic Book store in Hawaiian Gardens, California. There was a young lady there that had come to the event to interview him. So, I got to stand by and listen.

One question he was asked, motivated by the subject of the Thor comics, was if religion played a role in his work. The beginning of his answer was, “no kid ever got in trouble by following the Ten Commandments.” And then he expounded on the need for the positive influence of religion by talking about the Vikings. His point was, they needed to believe in Thor, in something bigger than themselves. They lived by raiding other’s people’s villages, and then fleeing for their lives – not a very noble endeavor. But if that’s the way you had to make a living, it helped, when you saw the storm clouds and heard the thunder, to believe that that was your god, Thor, fighting the Frost giants on your behalf.

Interesting viewpoint… Myths and legends are at their best when they help us keep hope alive, specially when real life is hard.

Plenty has been written about Kirby’s art and his singular influence on the comic book medium. So, I won’t add anything except to share with you this image, front cover and first page of a comic book he autographed for me that day.

Something else I remember from that day was his comment that comic books at that time had too much negativity. (I agreed, I had stopped buying many titles by that time.) So, I asked him, what can we do about it? His answer was, “Make your own.” In other words, get into the marketplace you love and produce the work you want to see.

Comics back then were “religion friendly”

The world Jack Kirby and Stan Lee were creating at Marvel comics from the 1960’s to early 1970’s was “religion friendly”. To some degree it reflected their upbringing, their generation (1920s-1930s), but it was also a part of our society at that time; probably because as a society we desperately needed hope. For kids growing up in the 60’s, the possibility of a nuclear world war was very real, and so were the struggles of the Civil Rights movement. Maybe it’s no surprise that that period also saw the birth of the Jesus movement.

Not waxing nostalgic but consider this panel, copyright of Marvel Comics, from Fantastic Four 72. Facing the Silver Surfer gone on a rampage, Sue Storm doesn’t see how they could survive against the all-powerful Silver Surfer. “All-powerful?” replies the Watcher, “there is only One who deserves that name; and his only weapon… is Love!”

“Religion friendly” was at one time the standard in our culture.

That exchange in that panel is reminiscent of another dialogue, a line from the Science Fiction classic movie, “The day the Earth stood still” (1951). That movie purposefully carried throughout a Christian allegory.

Near the end of the movie Klaatu is shot and declared dead.

Then Gort retrieves the body and revives him. We get this conversation. 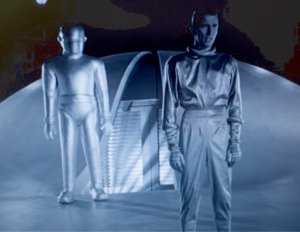 Snapshot from the movie “The Day the Earth Stood Still”

Helen: I – I thought you were…

Helen: You mean… he has the power of life and death?

Klaatu: No. That power is reserved to the Almighty Spirit. This technique, in some cases, can restore life for a limited period.

Not unexpectedly, Captain America carries that time’s sensibility into the Avengers movies. Captain America is about to jump out of a jet to intervene in a fight involving Thor and Loki:

Natasha Romanoff: I’d sit this one out, Cap.

Steve Rogers: I don’t see how I can.

Steve Rogers: There’s only one God, ma’am, and I’m pretty sure he doesn’t dress like that.

Myths and legends are what Speculative Fiction (including comic books) is all about. And when they are religion friendly, the hope they can bring has real power. I guess that’s one of the reasons why I appreciate the Crossover Alliance and The Untold Podcast and the other publishers that help Christian Speculative Fiction spread through our culture.

Share on TwitterShare on FacebookShare on PinterestShare on LinkedInShare on Email

Get New Stories in Your Email

Sign up to receive new stories in your email as they're published.

It’s all about communication. The thrill of research, discovery, and invention that drives me on, was cultivated in me by every person that taught me something in my life. And therefore it is meaningful, only, if I pass it on. This is why I teach. This is why I write.
END_OF_DOCUMENT_TOKEN_TO_BE_REPLACED